In case you guys didn't know, I'm a huge Harry Potter fan. I started reading the books when they first started getting published in Portugal, and the whole Potter world became a big part of my imagination. Even now, as a grown adult, the series is still a big part of me, even if there will be no more Harry Potter books or movies. Last weekend I went to the movies to check out Deathly Hallows: Part 2. I really liked it - obviously, as a fan, I have a tendency to nitpick, but I think it was a really good wrap-up for the series. Snape pretty much stole the show, but I don't want to spoil anything for anyone who hasn't seen the movie or read the book yet. Since he was so awesome, I felt like drawing something with Snape and Harry, and I decided to represent a scene that used to be typical at Hogwarts. Hope you enjoy it! 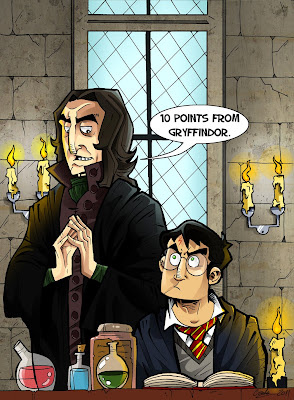 As a little treat, here's a progress shot of this particular piece: first lines only, then the flats, and finally the finished drawing.