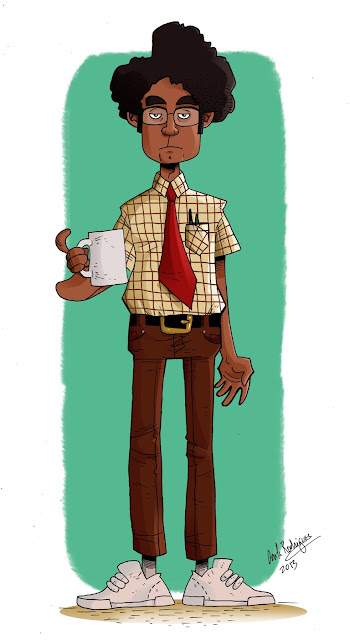 Hey guys, it’s time for another Mike and Carla Jam! It’s been a while since we jammed and I missed it, so it felt great to get back on track. Our theme this time around was Comedy Shows.

I’ve recently started watching The IT Crowd and I’ve surrendered to it. It’s an hilarious show, and I’m currently on its final season. It’s funny, when I started watching, I didn’t think I’d like it - shows with laugh tracks kind of annoy me now - but it really grew on me. So, I chose to draw Moss. He’s a sort of unique looking character - mostly because of his hair - and he was a lot of fun to draw. Initially I wanted to draw more of the gang - Roy, Richmond, Jen - but I’ve been drawing very little lately due mostly to reasons related to my day job, I feel rusty and I feared I wouldn’t do a good job if I tackled them all.

Anyway, it felt great to just draw for fun again, and I can’t wait until the next jam. Stay tuned toMike’s awesome tumblr to see what he did for the jam!
Publicada por Carla Rodrigues à(s) 21:19