It just hit me that I never got around to posting the 3-page comic I made for Zona Fantástica (a comics/illustration magazine). So why not do it now? I've been extremely busy and it's been difficult to find the time to produce new material, so that gives me a good excuse to post pages that are a few months old.

The comic I did was supposed to work like a Grindhouse trailer. I get a real kick out of those old, horror-grindhouse movie trailers - which are frequently better than the movies themselves - with lots of violence and cheesy taglines, so I tried to capture a little bit of that spirit with the comic. It was also a way to use my character - the Hammer Killer - on something other than a few random illustrations. He's a psychopath - much like Jason or Michael Myers - that comes out in St. John's night and starts hammering people to death. Fun, uh? Well, the joke is that in my hometown (Oporto, Portugal) people celebrate St. John's night by going outside and hammering each other in the head with plastic hammers. This guy just happens to use a real one.

Well, enough typing for now. I leave you with the first page of the Hammer Killer's comic debut. Click on the page to fullview, and enjoy! 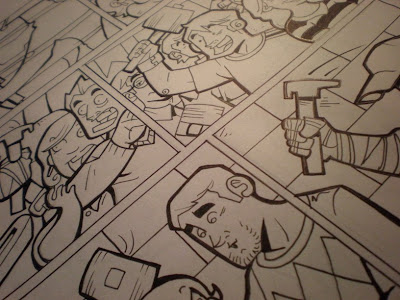 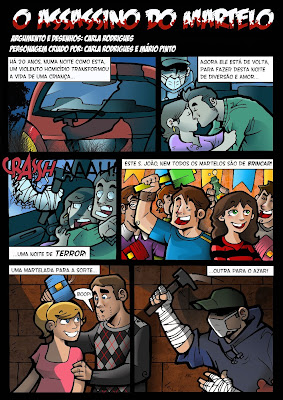 If you want to buy any or all of the Zona issues so far, you can do so at Zona's Blog (shipping is free inside Portugal).