This year, I was lucky enough to participate in a new project, involving comics and illustration, called Zona Fantástica. Fil is the artist and mastermind behind Zona, he had the idea to create a collaborative publication, that would allow artists to showcase their work in comics in a country where there aren't many opportunities to do just that. It started with Zona Zero, then Zona Negra came along (dedicated to horror, and released in Lisbon's International Movie Festival, MOTELx - I'll probably post the illustration I did for it sometime in the future) and, last but definitely not least, came Zona Fantástica, the third volume of this project, released in Oporto's International Film Festival, Fantasporto. It was the most ambitious volume so far, with 80 pages printed in full color and over 30 artists collaborating. I created a 3-page comic to be published inside, and I also had the pleasure (and honor!) of creating the cover. Here's a photo of a preliminary phase, the inks in process: 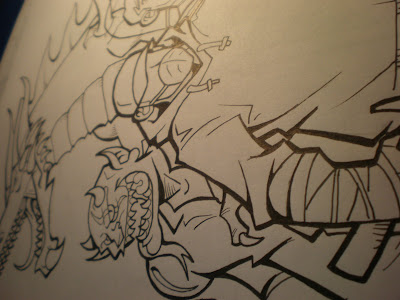 The cover features characters that can be found in comics and illustrations on the inside of the book (one of them is mine), and here is the final version: 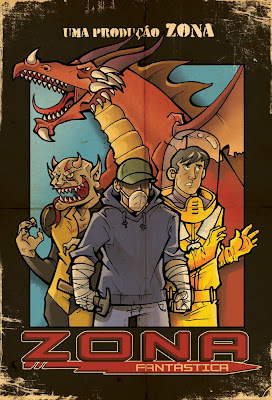 I wanted to give it an old, almost grindhouse-poster like feel, because I thought it would be fitting - Fantasporto started out being a festival dedicated mainly to horror cinema, and I have a soft spot for horror grindhouse flicks. I don't know if it's the cheesy dialogue or bad effects, but it's something that appeals to me - so much so that my comic inside plays out like a grindhouse trailer (or at least, that was my initial plan). I can't post the comic for now, but when it's cool to post it, I will. This was a great experience, I got to collaborate with some great people and we got to have a couple autograph sessions, which were very cool. 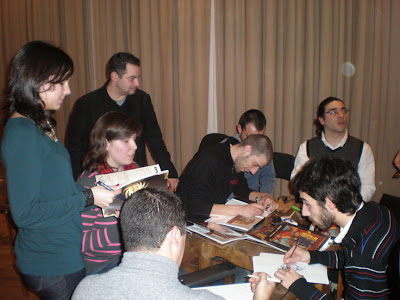 (The geek in the pink-striped sweater is yours truly).

It was very exciting when I started seeing the book pop in various bookstores, alongside other comics I read and love. 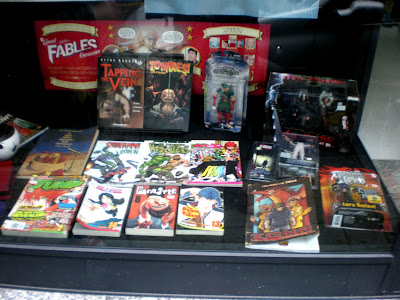 Especially since I drew and colored the cover, I feel a little more attached to this book and so felt extra happy to see it achieve success - the first edition sold out on the first week, and a new batch has very recently been ordered. The book is now available on Fnac stores too (before it was only available through online orders and specialized comic book shops). 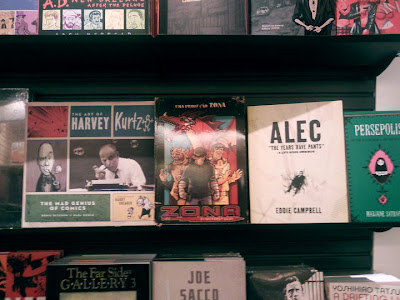 (There it is, right in the middle, sharing a shelf with Persepolis and many others!)

The book even got blurbs on national magazines, and has been having a great reception with the audience, receiving good reviews on blogs and websites. 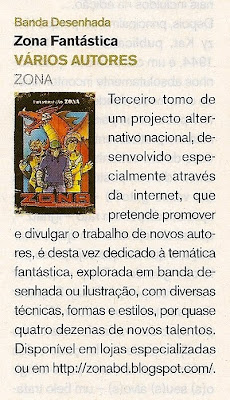 (it's in Portuguese only, this blurb was published on the magazine NS, of Jornal de Notícias)

So it's all pretty much been going wonderfully, and I have no doubt that the new volumes will be even better. The next one is already in the oven, and will be released at the International Comics Festival of Beja (where several original works from most of the authors will also be exposed)! This has been a great project to participate in, to learn from and to grow with. I hope we can continue for many years.
Publicada por Carla Rodrigues à(s) 20:06